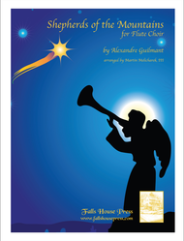 Shepherds of the Mountains was written as an organ work intended for use in the masse of the French Catholic churches. Alexandre Guilmant wrote many such works used during the offertory, communion, or as preludes and postludes. These compositions drew their inspiration from the many regional French Christmas carols or noels. This particular noel is from region of the Provence. It is one of 67 Christmas carols of Nicolas Saboly who was choirmaster of St. Pierre church in Avignon. Many of these were handed down for 300 years. This work is based on Saboly version Pastre Dei Montagno. This short work will give your Christmas program some variety from the common carols and music played during the holiday season.